I am a Squeegee How I produce my tapes

Artists tend to talk a lot about ‘process’, and it does start to get a bit abstract, as if we want to endow it with some sort of special portent. Well, when you develop a process you do feel that it’s a bit special. It’s part of you, and it is so in subtle and sometimes telling ways. But it’s also often very pragmatic.

Cotton tape isn’t my only medium, but since I first came across it in art school it has been giving me a lot to chew on. Like a lot of students, I was fascinated by materials, both the materials of art and of non-art. I had been cutting into canvas, to open up an ‘interior’ in painting, and this was one direction in the work. But as a starting point I found cut canvas somehow lacking integrity, in a physical sense.

Another strand of my work at art school was masking, in the usual tradition of hard-edge abstraction. Yet the image I was masking was actually representational – I was reproducing the glow of reflected colour. In this process, I discovered that the discarded masking tape had a story to tell of its own, but I was bothered by its imperfections – it’s not very archival, and I was in the business of making stuff that was going to go the historical distance. So I started to look for a material that I could use to mask off my lines, but which could then do its own thing.

When I came across these lengths of haberdasher’s tape in Lincraft one day, I thought I’d hit gold. It’s pre-made, for one thing, so I didn’t have to cut it, and it comes in different widths, but more than that, it’s finished, in that it has its own edges. The warp threads are woven back into the tape at the edges. The warp of cut canvas, on the other hand, is exposed at the edge, and the lengthwise threads can also be cut, making it uneven and potentially leading it to fray.

This word ‘potentially’ is salient here. I don’t have a problem with the canvas fraying– as such – it is usually already painted when you cut it. It’s more the potentiality that I’m alive to, its sense of inherent disintegration.

Cotton tape starts out as part of a long length, meaning that its disintegration takes place at the ends.  Of course, canvas also comes in lengths; but these are wider, and the selvedge is usually not reached, given the dimensions of the work; or it is hidden away out of view, with the messy bits. The illusion is that the work is flat and the edge of the stretcher is the edge of the work.

There is a bit of an insistence, in the land of expectations, that artwork be finished, and in some of my works I utilize this illusion, stapling the tapes to the back of the stretcher, defining the turning away as the edge of the flat ‘painting’. In others I allow the loose ends, just as sometimes painters show the whole piece of cloth.

It’s either/or-at-once: the subjunctive potential of the finished is always present in the unfinished, and vice versa.

The thing about cotton tape is that, unlike cut canvas, it can sustain this illusion of integrity within the composition of the work. Its edges give it, in itself, greater integrity. This gives it a completeness that disrupts the absoluteness of the unity of the larger work, but at once confers a greater sense of completeness to the whole.

When I started out with this tape, I was stapling lengths of it to the wall and painting it with a brush, first gesso on one side, then gesso on the other, then colour – oils at first, since that’s what I’d always used.

The first work was a very simple thing called Boomerang. This was quite successful. But then I tried a more ambitious work and ran into trouble. Firstly, it was taking me forever to paint the tapes, and then, once they were done, they were in places quite wrinkled. For a long time I was quite stumped by this latter problem. It was a whole year till I really threw myself into trying to resolve, which, as always happens, happened at the last minute.

My proposal for The Planes had been accepted, but it took a long time to design the work. When I got out to the studio, I still didn’t know how I was going to make it happen. I had already decided it would be quicker to airbrush the colour, but that wasn’t going to work with gesso, and the crinkles wouldn’t be ironed out. But I got on with it and set about prepping the canvases, and in that process I was using disposable gloves. This was so that I didn’t get gesso all over my phone when I went to answer it. Before taking these off I would squeeze off the brushes in to the gesso before putting it in the water.

One morning I woke up and the answer just came to me: squeeze off the gesso. After a few goes at it – getting the right consistency of the gesso and the right size of tub – my process came together: cut, dip, squeeze, clip, hang and weigh down.

The roll of tape is carried by a narrow stick of dowel, which passes through a couple of loops of wire attached to two brackets clamped to one end of the work bench. I go backwards and forward pulling the tapes off the roll, tensioning them as best I can and then cutting them to the right length before attaching a foldback clip.

Then I prep my gesso, put on my gloves and, one at a time, apply the gesso. This is done by carefully dropping each tape into the gesso, making sure that there aren’t too many overlaps, because these can form bubbles of air. Keeping the clip out of the liquid, I dab them down so that their surfaces are covered evenly. With my fingers I also apply a bit of paint to the top end of the the tape, being careful not to wet the clip, as these can be a bit of a bugger later on if they are glued together. Then, taking the handle of the tub in one hand, and with the other holding the tape just below the clip, I step up onto the Dalek – one of those round stepstools they used to have in the library – and place the clip onto a wire hook on an old bit of grille I once picked up off the side of the road thinking it might be art.

Holding the bucket under the tape to catch the gesso, I run my fingers down the tape, flattening it, giving a nice surface and leaving just enough gesso to give it a bit of bulk. Then with my clean hand I attach a weighted clip. This is a little roll of lead, originally off the roof. Weighting them holds them taught, so they lose any wrinkles.

With a little upward flick of the gesso glove, I let go and watch it swing around a bit. If I’ve been a bit fierce it might swing too far and hit the other tapes, which I then have to smooth off. They hang for a day or so to dry, or a few hours if it’s a hot day, and I can then attach them either to the spraying wall – an artwork in its own right – or whichever support they are going on.

And that’s how, like Andy Warhol, I have become a machine. I should be smart and have a factory in India or somewhere doing this for me. Maybe one day I’ll get around to that. 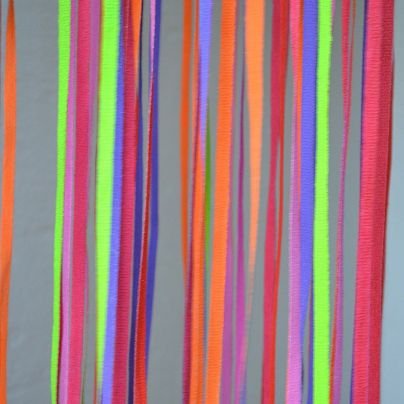